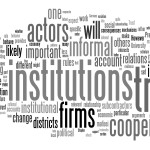 In his course, political economy professor Alan Karras transforms himself from a Machiavellian Prince into a Hobbesian dictator and a pragmatist in the vein of Rousseau. He embodies Adam Smith, Hegel and Marx in turn, each with the command of a brilliant orator, all in attire that would convince any aesthetics aficionado that he’s stepped straight from the pages of The Sartorialist.

Professor Karras masterfully guides students through the canon of political and economic theories of the last five centuries. He challenges students to explore how the writings of this host of thinkers – largely dead, white, bearded men – have shaped the way we and our governments deal with the world and individuals.

Karras is a professor in the old school dealing with old schools of thought, but he will not accept old thinking. Your questions will be deflected back toward you. You’ll gain more than a repository of information – and bragging rights for conquering Hegel. Instead, students will question the assumptions and -isms that make up the modern world, and create their own.