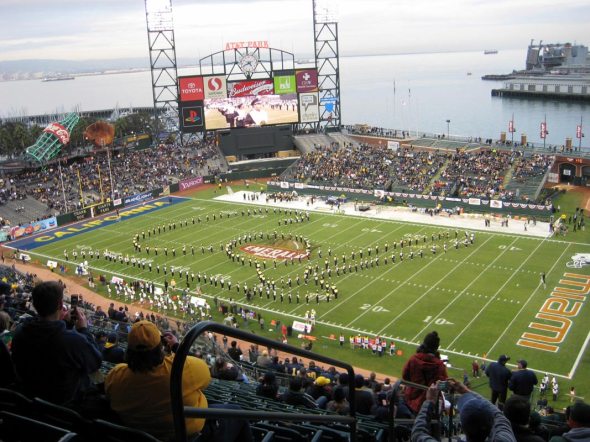 UC Berkeley’s sports teams compete in intercollegiate athletics as the California Golden Bears. They participate in the NCAA‘s Division I-A as a member of the Pacific-12 Conference. The official school colors, established in 1873 by a committee of students, are Yale Blue and California Gold.[99] Yale Blue was chosen because many of the university’s founders were Yale University graduates (for example Henry Durant, the first university president), while California Gold was selected to represent the Golden State of California. The California Golden Bears have a long history of excellence in athletics, having won national titles in football, men’s basketball, baseball, softball, men’s and women’s crew, men’s gymnastics, men’s tennis, men’s and women’s swimming, men’s water polo, men’s Judo, men’s track, and men’s rugby. In addition, Cal athletes have won numerous individual NCAA titles in track, gymnastics, swimming and tennis. On January 31, 2009, the school’s Hurling club made athletic history by defeating Stanford in the first collegiate hurling match ever to be played on American soil.

UC Rally Committee running Cal flags across the Memorial Stadium field at the 2002 Big Game. (Note the Stanford visitors section on the left and the UC Berkeley alumni section on the right.)

The Golden Bears’ traditional arch-rivalry is with the Stanford Cardinal. The most anticipated sporting event between the two universities is the annual football game dubbed the Big Game, and it is celebrated with spirit events on both campuses. Since 1933, the winner of the Big Game has been awarded custody of the Stanford Axe.

One of the most famous moments in Big Game history occurred during the 85th Big Game on November 20, 1982. In what has become known as “the band play” or simply The Play, Cal scored the winning touchdown in the final seconds with a kickoff return that involved a series of laterals and the Stanford marching band rushing onto the field.